Posted on
March 16, 2019
in
Effects of Blue Light
Posted by
Ron Allen

We have known for several years that high-energy blue light can damage the eyes. Macular degeneration is a condition that causes blindness in the elderly and is considered to be the result of cumulative high-energy light exposure over the years. Now that virtually everyone, and especially children, spends time every day staring at a digital device screen, the cumulative exposure to blue light is increasing.

But, exactly what does blue light damage in the eye? There is research indicating that the energy processing organ in the retinal cell is damaged by blue light exposure. This organ is the mitochondria.

What Is the Mitochondria?

The mitochondria are a part of human cells and responsible for life and death functions.

Meet mitochondria: cellular compartments, or organelles, that are best known as the powerhouses that convert energy from the food we eat into energy that runs a range of biological processes.

As you can see in this close-up of mitochondria from a rat's heart muscle cell, the organelles have an inner membrane that folds in many places (and that appears here as striations). This folding vastly increases the surface area for energy production. Nearly all our cells have mitochondria, but cells with higher energy demands have more. For instance, a skin cell has just a few hundred, while the cell pictured here has about 5,000.

Besides being the energy processing centers in human cells,mitochondria do things like store calcium ions to support proper muscle contraction and blood clotting and create the building blocks for hemoglobin for oxygen transport within the body. Mitochondria are also where the production of steroid hormones begins.

Mitochondria are essential to cell life, and human life,but can also cause a cell to self-destruct in a programmed sort of cell death in response to strokes, heart attacks, and other events characterized by excessive stress.

These life-and-death roles are just a few examples of the many parts mitochondria play. "In some way, just about every cellular process is linked to mitochondria."

Because of the important roles that mitochondria play inhuman cells, they are part and parcel of many diseases in which their functionis compromised. One such situation has to do with blue light and damage to mitochondria in the cells of the eye.

Going back more than a dozen years there has been scientific evidence of how blue light exposure damages mitochondria in the retinal cells of the eye. In a study published in the Journal of Biological Chemistry, researchers exposed non-pigmente depithelial cells from the retina to blue light (2.8 milliwatts/cm2 of 390-550nm blue light) for prolonged periods of time. At six hours it was found that cells had a reduced “respiratory capacity” which is another way scientists say that the cells were not processing energy as well. This got worse with longer periods of blue light exposure.

The cause of the problem was damage to the mitochondria in the cells.

We conclude that visible light can cause cell dysfunction through the action of reactive oxygen species on DNA and that this may contribute to cellular aging,age-related pathologies, and tumorigenesis.

The research findings did not stop in 2005 but have continued. In 2014 researchers found that ganglion (nerve) cells in the eye maybe more susceptible to damage that the photo receptors.

The retina is the only part of the central nervous system that is exposed to light radiation between 400 and 780 nm. Short wavelength light (SWL) ranging between 400 and 480 nm are absorbed maximally by chromophores located in mitochondria.An abundance of mitochondria are located in retinal ganglion cell (RGC) intraocular axons and photoreceptor inner segments and as a consequence SWLwill impact these organelles.

The researchers state that the risk of eye damage is worse when there are preexisting eye problems and that cumulative exposure is likely to cause more damage. They suggest that the best approach is to reduce the exposure of the eye to excessive amounts of high-energy blue light. This is especially important with patients with preexisting conditions like glaucoma.

Why Are Digital Devices Such a Problem?

Blue light is part of the visual spectrum and is part of sunlight. So, why is there a problem with blue light and digital devices?Unfortunately, the amount of blue light emitted from a digital device is roughly four times that found in sunlight where blue is balanced with all of the other colors of the visual spectrum in equal amounts. Because we spend more time looking at digital device screens than ever before in human history and because of the light from a digital screen being tilted toward the high-energy blue end of the spectrum, cells in the eye get more damaging light. Themitochondria which are so important to cell function and cell life are damaged.And, over the years such damage will only accumulate to the point where it affects vision.

We have written about the risk of harm from digital devices and the availability of protective lenses to shield the eyes from blue light, especially in children.From sleep disorders and digital eye strain to making autism worse, there are risks for their children that parents should be aware of. Fortunately, many of the effects of blue light can be easily reversed such as avoiding digital device games right before bedtime or taking “eye breaks” when working at a computer all day long.

But, the mitochondrial damage from cumulative blue light exposure is insidious and the damage may not be apparent for years. Thus, it is really important to be aware of this risk and to take preventative measures. It is highly unlikely that computers, smartphones, tablets, and the rest are going away. They have become integral parts of our lives whether for work,communication, or recreation. The best approach for yourself and your children is to use eye protection in the form of lenses that block excessive amounts of potentially harmful blue light from reaching the retina in the back of the eye.Take a look at what is available by following this link. 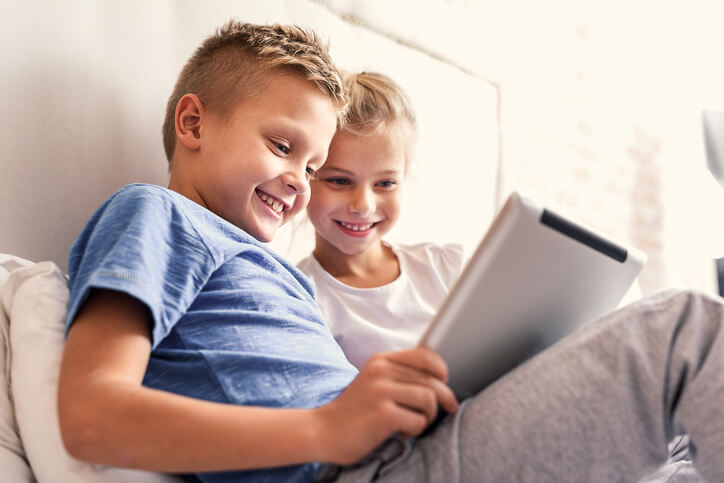